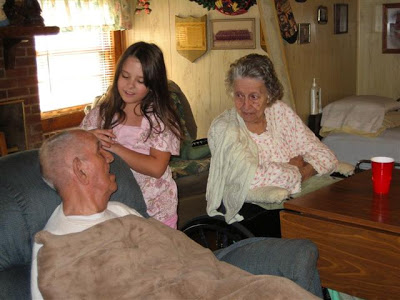 By Shelia Taylor on November 27, 2010
Today, Saturday, November 27, 2010 @ 8:15 am W.R. Taylor passed away at the age of 91.
Rest in peace Grandpa.  You will be missed but never forgotten.
Below was originally posted on Wednesday, November 24, 2010 but updated today
Who is W.R. Taylor?  He is my grandfather.  William Ross Thomas Taylor or Willie Ross Thomas Taylor.  To me, he was just grandpa.  I’ve been a horrible granddaughter.  I haven’t visited when I should have or called when I should have, but my grandparents are never far from my mind.  My family is never far from my mind.  They are my family.  They are what motivates me.
I have very fond memories of my grandpa.  Spending hours in the spring helping him plant his rose bushes and tend to his garden.  Washing his car for a $1 so I could go to the country store for penny candy.  Watching him shovel a handful of nails into his mouth so he could work on whatever piece of furniture he was upholstering.  That always scared me.  What if he swallowed a nail?  He never did swallow a nail.  I’ve only heard him say two cuss words in my entire life and I’m sure I must have dreamt those.  He was a man I went to church with for thirteen years.  Every Sunday, he’d drive around the town, picking up his grandkids and load us all into a vehicle and we went to church with Grandpa.  If you got a thump on the back of the head, you were misbehaving and boy could his arm reach across a pew.  No matter where you sat, he could reach you.  I enjoyed those Sundays with Grandpa.  He was there with his gaggle of grandchildren.  He had 10 of us to care for throughout the Sundays.  My grandpa also made the meanest most delicious breakfast in the world.  He was a cook in the Navy and boy could the man cook.  No one can scramble eggs like him.  No one can make bacon as crispy as him.  If you were a grandkid and you spent the night with him & my grandma, in the mornings you’d hear “Rise and shine. Time to hit the floor.”  You were told once.  In fact, I’m not sure any of us grandkids ever stayed in bed long enough to hear it twice…we would be up in a matter of seconds…brush our teeth, dress, and be at the breakfast table.  I remember going to the grocery store with my grandparents and then just with my grandpa when my grandmother couldn’t make it.  I remember borrowing his Cadillac, his pride and joy, and pulling into the garage from the right vs the left and scrapping all the chrome off the right side of the vehicle.  I sobbed for hours.  I knew he was going to hate me for the rest of my existence.  He didn’t, he told me stop crying and let it go.  He never called my mom Lek (rhymes with deck) but Leak and he never called my aunt Dolorese but Dorsie.  His only daughter (5 boys and 1 girl) wasn’t called Gloria but Sister and we still call her that.
Grandpa was a man who loved, who never had an unkind word, who worked harder than anyone I knew, and was a man that believed in faith and in God.
My dad sent me a text a couple of nights ago, letting me know that he wasn’t doing so well after his last return from the hospital, and that if I wanted to, that I should go visit him.  My dad knows me and said if I didn’t want to visit, then I didn’t have to.  There are images in my head of people and I want to remember them a certain way…not the way that life makes us look at the end of our time.
My sister & my nieces went to visit today.  Sister (my aunt) said he probably wouldn’t talk or acknowledge us.  When I saw him, I almost broke into tears.  Physically he wasn’t the same man, but spiritually, he was.  There is an essence about my grandpa.  He fills a room.  He’s the patriarch of the Taylor family.  He is a legend to us.  I sat with him for a while.  The Andy Griffith Show was on the TV and he was staring at it.  It was as if I was a kid all over again.  Watching him, watch the TV.  I talked to him like he wasn’t 91 years young.  When I left him, I said “I love you Grandpa,” and he said “I love you too.”
I don’t know what tomorrow will bring the Taylor family, but as I watched his two oldest children (Sister & Michael) go through paperwork that dealt with funeral arrangements and such, I do know that my grandpa lived a great life.  He’s still married to his lady love, Ruth, who is in the bed next to him. He raised 6 good kids, helped raise 11 good grandkids, and though his great grandchildren might not get to experience what us grandkids experienced, he will still touch them.
And if he happens to slip into the good night without me seeing him or talking to him again, I at least know that I got to tell him that I loved him one last time.
Grandpa, I love you.
~Love your Scooter.
Grandpa, Riley, Grandma – Thanksgiving 20??

I respect and acknowledge the Gadigal people of the Eora Nation as the First Peoples and Traditional Custodians of the land where I live.
I pay my respect to their Elders, past, present and emerging.
#AlwaysWasAlwaysWillBe
Through learning about your songlines, I found my own.

Currawong visit 🖤🪶
Made the Top 3 and published in @writersdigest September/October 2022 issue.
an absolutely amazing feeling and experience - thank you to @flowathletic for holding space for this, @breathless_expeditions for the breathe work, and @activeyogi for capturing the peace of being in the zone
🖤💛❤️ If you ever get the chance to have a yiḏaki played onto your heart center, please do not let it pass. It is a magical experience. The vibrations and energy exchange is beautiful and profound.