Fear & the Half Marathon 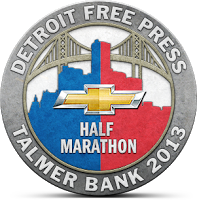 I started training in June for this because I know me. I knew I would let life get in the way and make excuses not to train. I gave myself 5 months to get ready and I’m glad I did because the last few weeks of training turned into bare minimum training or no training at all.

As the race crept closer and closer, every time I thought about it I would get butterflies in my stomach (excitement). I was proud of the fact that I had set a target and was going to reach it. Occasionally, I would get tears (fear) when I thought of it. More often than not, it was the butterfly feeling. In my heart of hearts, I knew I was doing the right thing or the good thing. I was pushing myself out of my comfort zone. I was pushing boundaries. I was trying something new. Something I wasn’t even a real fan of, but something I was allowing myself to receive the experience of. All the training miles made receiving the gift of being able to zone out, zen out, peace out, and be one with the Universe worth it. I may not have been (and still am not) a fan of running, but I allowed myself to still receive the gifts from it.

The  night before the race, as I walked Nick, I had an overwhelming sense of fear hit me and I broke into tears. I was about to face one of the scariest things I had ever set my mind to doing. I looked up at the stars, Miss Luna (the moon), and asked them, my guardian angels, my spirit guides, and my Mom to give me the strength to complete the race and to take my fears away. I knew what I was feeling was fear. I knew I wasn’t going to die running this race, but I didn’t know if I had the chutzpah to finish it. I can’t even compare the fear to anything I have ever done. Even moving to Detroit (a city where I knew no one), did not bring any fear into my life. Moving to Detroit was just like picking a pair of socks to wear for the day. I just did it.

Running this race equaled FEAR like I have never known nor want to feel again.

I was just going to have to face fear in the face.

I stepped into my designated corral and felt the tears of fear fill my eyes again. I was standing in a crowd of thousands but utterly alone. The music p.a. started playing “Lose Yourself” by Eminem and I thought how apropos. Then I just let myself go and fell into the cliche and closed my eyes and just listened to the words:

“You better lose yourself in the music, the moment. You own it, you better never let it go. You only get one shot, do not miss your chance to blow. This opportunity comes once in a lifetime yo. You can do anything you set your mind to, man.”

I didn’t want to fail at this.

I had one target: TO FINISH.

It was the only target I set. No set time. No set pace. FINISH

I set my target. I had made up my mind. I was going to finish even if I had to crawl across the line.

Fear left me as I put one foot in front of the other.

I trained without music/headphones. I ran the race without them. It’s amazing how silent your head gets when running (or at least how silent my mind gets). I let my mind get into the zen run zone and before I knew it I was somewhere in Windsor Canada around Mile 6 with the announcer saying, “Welcome to Windsor where the wind is at your back and the sun is in your face,” and I returned to the zen run zone and I was back in Detroit around Mile 9.

Around that Mile 10 is when the physical and mental exhaustion started to kick in. My body was starting to feel the grind. My hips and right knee felt like they were going to ignite themselves on fire. I felt muscles and bones I had never felt before and they were all flipping me one giant bird.

No pep talk was working so I just emptied my head again and by the time I hit Mile 12, my mind was screaming if I don’t see the finish line soon all hell will break loose. It was over this race. It was over running. It was David Hill Done.*

Then the Universe gave me a glimpse of the finish line.

I crossed the finish line 3 hours after starting.

Then I broke down in tears. Not in fear, but in sheer emotional release of letting it go of that fear.

I had set a target. I had reached it. I did it.

TRUTH: I am David Hill Done* with half marathons. I have no desire or plans to run another one. Check it off of the Bucket List. I just wanna go play in the sand and in the ocean.

*Those who aren’t in the media/entertainment industry won’t get the joke, but those who are, well, you know what I’m talking about and you know how DONE, David Hill Done is.

Tagged as: Fear, Half Marathon, My Life, Running