Putting Yourself Out There and Being Rejected 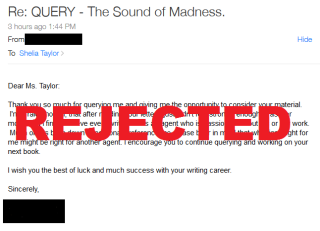 And so it begins…

Putting yourself out there and being rejected.

I don’t mean from a potential mate, but from potential agents.

The query process can make or break a writer. We all think we’ve got what it takes to be the next big writer. Some of slave away for hours, days, months, years on a novel. While some will be happy to say, “I wrote a novel” and then shove it in the bottom of a desk drawer. Some of us will put ourselves out there to agents who will hopefully put us out there to publishers.

Finding an agent who will agree to read more than your query letter is a lot like fishing. You never know when you’re going to get a bite. Could be as soon as you cast your first query letter out. Could be after you cast a dozen query letters out and hell, could be never. You could paddle your boat back to shore and go home empty handed with nothing to show for your hard work.

When I started the query process with my novel The Dumbing Down of Love, it was a nerve-racking experience. I thought I was ready for it, but looking back, I don’t believe I was. Being rejected by a generic standard form letter was disheartening at first and made me wonder, did anyone even bother reading the query letter? My favorite query letter rejection was one that stung a little worse than the others. The agent wrote “while your writing good and is sellable, it is not for me”.

I had validation that I was a good writer with a novel that could sell, but not an agent who wanted to get behind it and sell it to a publisher.

Eventually after 30 or 40 plus rejection letters, I retired my hunt for an agent for The Dumbing Down of Love, but I didn’t give up writing.

My latest query hunt is for The Sound of Madness. I have never been more proud of something I have written than I am of this project. I truly adore and love this novel. I, as a writer, would buy this book and then tell all my friends to read it.

I received my first rejection letter today. Not a form letter, but a nice and crafted response from the agent. Instead of letting it get me down, I just filed it into a folder and moved forward.

I have to remember that I have to put myself out there and believe in myself and never give up.

🖤💛♥️
I respect and acknowledge the Gadigal people of the Eora Nation as the First Peoples and Traditional Custodians of the land where I live.
I pay my respect to their Elders, past, present and emerging.
Through learning about your songlines, I found my own.
#AlwaysWasAlwaysWillBe
🖤💛♥️

Thank you @leanderklohs and Donald for a lovely and laughter filled Sunday. #ReasonsIAmBlessed #HowDoesItGetAnyBetterThanThis✨
🥰This is why I donate.
Take the liquid gold.
Here it is, a short story…