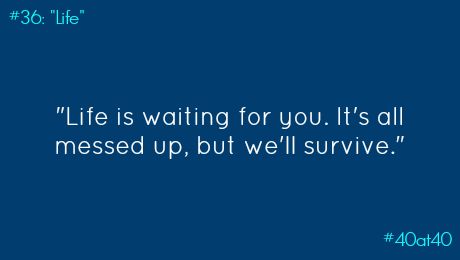 Music for the Soul

First, I adore this band. I have seen them open up for Third Eye Blind circa 1997 or 1998, played to a sold out crowd at the Cotton Club in Atlanta, and have seen them at 2 1065 The End’s Weenie Roasts plus more shows than I need to list. Some of my favorite concert moments have been with this band. Their music will always have a place in my heart and soul. There were so many OLP song’s I could have used for this list. Like Jimmy Buffett, I could have written a list of 40 songs just from them, but there is one song that go back to and one song I’ve been inspired by more than once and it’s “LIFE” from their SPIRITUAL MACHINES album. It inspired “Life is Waiting for You” that I wrote in 2011. I had lived 2010 in an alcohol induced hazed and 2011 was the year I decided to start living again. This song was my kick in the butt to live, to breathe, and to move on.

Categories: Music for the Soul

I respect and acknowledge the Gadigal people of the Eora Nation as the First Peoples and Traditional Custodians of the land where I live.
I pay my respect to their Elders, past, present and emerging.
#AlwaysWasAlwaysWillBe
Through learning about your songlines, I found my own.

Currawong visit 🖤🪶
Made the Top 3 and published in @writersdigest September/October 2022 issue.
an absolutely amazing feeling and experience - thank you to @flowathletic for holding space for this, @breathless_expeditions for the breathe work, and @activeyogi for capturing the peace of being in the zone
🖤💛❤️ If you ever get the chance to have a yiḏaki played onto your heart center, please do not let it pass. It is a magical experience. The vibrations and energy exchange is beautiful and profound.