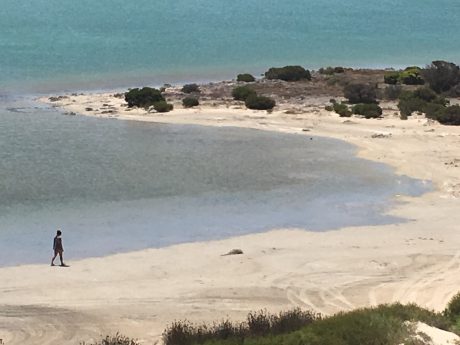 Staring at the cream wall in front of her, tears streamed down her face. She was losing her mind. No. She wasn’t losing her mind. She was losing memories of him. She felt each memory slip away as it slid down her cheeks. She was afraid if she blinked that another memory would disappear so she stared hard at the wall through blurry eyes. This couldn’t be happening. Not now. He meant everything to her and he said the same of her. As she sat staring at the walls, she wondered if it were all lies.

She blinked away tears and cried harder.

She saw him in his favorite faded band tee shirt. He was smiling at her, green eyes sparkling like an emerald caught in the summer sun. The memory shined in front of her as if it were on the big screen and then faded into the wall like a movie that had ended.

Each of her favorite memories did this.

The memories of their first vacation camping in the mountains together and their four-day impromptu road trip following their favorite band from city to city. A band they both had listened to as teens and listened to as a couple.

Their love was filled with a passion for life and for each other. They made each moment together count be it in a bookstore or nights wrapped together in a mess of tangled limbs and pleasure.

Their love was true. It was the kind of love that rarely existed anymore in the land of swipe right or swipe left.

She had to blink again.

She knew the memories would be gone the moment she blinked. She wanted to cry out Stop! but there was no voice in her throat. There was nothing but a slow gurgle of a sob.

She saw the memory of when they first met. They had been at a mutual friend’s barbeque. He was wearing a faded dark gray tee shirt and army green cargo shorts. Her eyes spotted him the moment she stepped into the backyard. There was an instant alignment between her hart, mind, and soul. She knew then he was her person. They were introduced and when she shook his hand it was if she had been uploaded with memories of his past and present. They talked as if they had known each other all of their lives. Past. Present. Future. At the end of the evening, they exchanged numbers and promised to see each other again and they kept that promise. They saw each other weekly. Once a week at first, then several times a week. Sometimes staying at each other’s places and at their own. Each respecting the introverted quiet space the other craved. No questions asked. Trust was mutual and honesty was easily given. They were happy to have each other in the capacity they could give.

She watched his smiling face in the faded gray tee shirt disappear into the cream wall in front of her. That memory was now forever gone.

Each memory peeled out of her mind like peeling the thin skin from an onion.

She cried harder. She didn’t understand what was happening to her mind as she sat and stared at the wall. Was her life flashing before her eyes? No, this was too slow. She had read when one’s life flashes in front of them it is in the blink of an eye and a flash of memories all at once.

She was reliving each favorite memory moment by moment.

This only made her cry harder.

Another memory danced before her eyes, it was of them sitting in the park watching the sunrise. They both had a bad case of insomnia that first night in the park. Each had messaged the other at the exact same time. They had met at the park that was between their two homes. She had laid out a blanket and waited for him. Once he arrived, they just lay on the ground in each other’s arms and stared at the dark and star filled sky ahead of them. In each other’s silence, they had found comfort. One letting the other silence the other’s mind. Only a few words had been spoken but so much more had been said in the quiet space between them. It became a ritual for them when the madness of the mind needed to be silenced. One simple word said or sent. Park. One simple reply said or sent. Okay. It’s how they worked and how they thrived in it. Many didn’t understand their relationship but no one else had to but them.

The memory faded into the wall.

That was it! She was in a nightmare. Stuck in a twelve by twelve cream colored room, sitting on a couch, watching her favorite memories of her life fade away.

Why were there only memories of him?

Why no one else?

Between the tears, she realized she didn’t really care why. Their relationship was important her and to him. She was happy to have them keep her company even if she was losing them.

I love you a voice echoed through the room. I love you so very much.

It was his voice.

Wiping at her tears, she looked around the room.

Where was it coming from?

She was paralyzed with fear. She couldn’t move or she dare not move. She was too afraid that if she did, she would fall into the void. What void she couldn’t answer but moving met falling and she did not want to fall.

A memory of him flashed onto the wall. She didn’t recognize it. He was standing on a road, holding a hand and beckoning the person to follow. She caught a glimpse of the citrine embedded ring he had bought her years ago. It was her hand. He was beckoning her. He turned, still holding her hand, leading her. He turned around and smiled at her. She smiled at the wall. It was the first time she had smiled since she started losing her memories of him.

Come on he beckoned.

A spark of love in his eyes.

I love you he said.

He smiled again and slowly started to fade into the cream colored wall. She watched until the entire room fell to black.

Then all was silent for her.

Sighing heavily, he wiped the tears from his face. He could finally let go. He had shared all of his favorite and most important memories of her with her. More importantly he was able to say I love you one last time before he had to say goodbye.

How much time had lapsed? Minutes? Hours? It was not enough.

Slowly rising, he stared down at her, kissed her one last time and said his final goodbye.

His hand started to tremor over the machine but he knew what he had to do. Pushing the button, the machines in the entire hospital room fell silent.

I love you he said to her. I love you so very much.

Somewhere around him or within his own head, he heard her voice repeat his last words to her.

Notes:
The inspiration of this is two-fold. I am currently reading I Am Alive and You Are Dead: A Journey into the Mind of Philip K. Dick and in the book the author speaks about a moment when Phil goes to the bathroom and reaches for a light switch that’s a chain or pull light switch vs. the current standard one. The reality is that the light switch has always been the current flip up or flip down switch and has never been a chain at all, but that Phil remembers the chain light switch so vividly he knows it has existed. As I read about this, the “she” of the piece above came into my head. Just a woman in a black tank top and shorts sitting on couch or bed crying. I then heard her say in her mind, “I am losing my memories of him.”
I didn’t really have an idea of where I was going with this piece but the second fold of inspiration comes in here. Prior to me starting to read the above book, Nick had shared an article of near death experiences and people who had experienced their life flashing before their eyes in that moment of near death. It seemed to fuel the character or I let it fuel the piece.
I continued to write and still had no clue where I was going with it. Then it sort of hit me. She’s dying and he’s sharing his favorite memories with her. That’s what she was seeing and losing. His memories. Not hers.
When I had that realization, it sort of fucked with my head as I started to wonder if my mom was like the woman in the piece. Could I be subconsciously imagining this is what it was like for her as she laid there in a coma? Could she see and hear the things my dad, my sister or me said to her but not understand why she was seeing and hearing them?
In the beginning, the piece was just an exercise of thought or an exercise on answering, “why is she losing his memories” but in the end, it became a piece that hit close to my heart on more than one level.