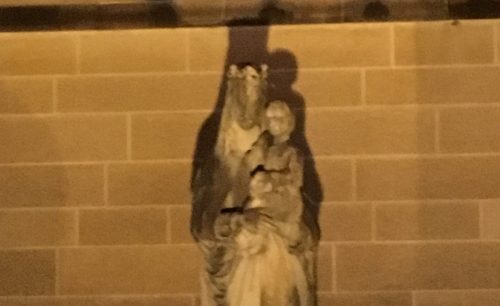 The stake through his heart pierced more than the depths of his soul, it pieced together all of his past lives to this one. Every forgotten memory rushed before his eyes. A Viking warrior, a pauper on the streets, a jungle ant, and so many more flashes of his past but what hurt him was the flashes of the life he was now losing. The smell of the sea air and frangipani caught in the breeze. The glow of the moon and the once loved warmth of the sun on his skin. The sound of the wind dancing with the leaves and the crows that laughed at him at dusk. Would those be the things he missed the most?

The pain coursing through his body proved to be more like a shot of adrenaline versus his life force fading away. He could hear her laughter slowly crawling toward him. A lover scorned so many years ago but it was not he who had scorned. She was the one that should have been lying with a stake through her cold dead heart. How he hated her! A rage filled him. She had crushed him once and he would not let her do so again. If he were to die, it would not be by her uncaring hands.

Summoning the energy from his hatred of her and the adrenaline of the pain, he backed further into the depths of the long hallway. He just needed a few seconds to gather his wits about him and to remove the damn stake. Maybe he would bleed out or just maybe he would heal enough to end her wretched life.

He wasn’t sure where they went wrong. Their lives seemed perfect. They seemed happy. He was happy. The vile beast chasing him turned on him, banished him. Maybe it was because he refused to convert her. He made a promise long ago not to let another life fall into the same darkness his had. His always-numbered days wouldn’t allow it. To be honest, he also didn’t have it in him to spend a lifetime with anyone. Regardless of what people believe, living longer than most was not a blessing but a curse. She seemed to understand it at the beginning but somewhere along the journey her heart and soul darkened.

Collapsing in a corner he found the life force he needed to remove the stake from his still beating albeit slow heart. Studying the tip he sighed. Silver laden with a ruby embedded tip. He knew then he might not recover from the attack. There was a very good chance he might die.

Closing his eyes, he slumped into the corner and clutched the stake with hatred. It would be his saving grace if ever there were one. He steadied his heart, slowing it down to a dying rhythm. Knowledge had been his power through all his of past lives and his current life and it would be what carried him through to the next one should he be granted one.

“Running like a scared animal,” her voice slithered through his brain.

He fought the urge to open his eyes and look at her. He could picture her raven hair falling past her shoulders. She had come to wear only black on black clothing that had become her second skin. He once found her stunning but her current look was nothing short of atrocious. He heard her kneel down beside him and check his throat for a pulse.

“I hoped to drain the life force from you myself,” she muttered in an anger that made him clinch the stake tighter.

Her fingers traced down the side of his face and if he could have recoiled from her touch he would have. It was as cold as freshly fallen snow, stinging his skin.

With a sigh, he heard her let her guard down. “Oh how I…”

He struck; driving the stake into her heart with such a force that it fell through to the other side.

Her face registered shock then horror and then the reality that her heart had been ripped in two.

He watched her collapse onto her side as blood poured out of her, down her. In the life that lingered in her, she mouthed words he could not hear. Words he cared not to hear. He watched her life slip from her eyes and as the last bit of his energy disappeared he felt himself collapse inside. Not from a broken heart but because his life force was fading just as fast.

Falling back against the wall, he placed his right hand over his heart and recited, “I am above death” in his native Latin tongue. He prayed it would be enough to stop death from knocking on his door.

Breath filled his lungs as if they had a slow reverse leak like that of a thread less tire. The coldness that filled him started in his head. The pain that would waken him would be as the heart regenerated itself. It would feel as if his skin, muscles, and veins were being ripped off layer-by-layer and piece-by-piece. He often compared the pain to having a billion atom bombs decimating his cells. The pain could last for days. The longest he had ever been in pain was six months. His wounds should have killed him but some how he survived and escaped the Germans. He would later have his revenge on those that tortured him and killed so many. Their deaths were worse than those they killed though no one would be able to know. Those who would have wanted revenge were dead but in their honor the men paid for every scream and tear they had caused. The revenge invaded his life for six long years but at the end, he could hear the souls of those lost thanking him for making their tormentors pay for their sin.

At least that’s why he told himself.

Revenge wasn’t often in his heart. He kept away from those that inflicted pain. He found no joy in it. Even as a Viking warrior he was never a cruel one.

His brain gasped for air that his lungs could not provide. His heart longed for blood that had long drained and dried around him. It would be a slow process. The silver had poisoned his blood. What little that had not been corrupted by it had to fight off the lecherous energy of the ruby. Its energy was like a cancerous cell, devouring all that was around it. Recovery wasn’t impossible but it wouldn’t be easy.

NOTES:
Sharing this piece, or as I call it, a character piece with everyone. I have so many of these but never do anything with them. With the short piece Don’t Blink, I received a lot positive feedback from it. It meant a lot to me. It made me want to share more and see what feedback comes with it.
This was also inspired by life flashing before your eyes conversation with Nick. As we talked, in my head, I saw the character above fall backwards as a wooden stake went through him. I wanted to know more about this character so I started to just write what his thoughts might be as he was dying.
When I write, I often just lose myself in writing or character. I really don’t know what they might say or do until I write it. As I wrote for the character above, I realized he wasn’t a vampire as the wooden stake might suggest but I also realized I had no clue what he was. I still don’t.
I don’t plan on exploring this character anymore than what I’ve written above. I wrote the above on my train ride to work and I thought he might return and say I want my story told, but he hasn’t given me a real story to tell or demanded his story to be told. So I will let him fade into the horizon.

Tagged as: Character Piece, Flash Fiction, My Writing, The Life, The Writing Muse